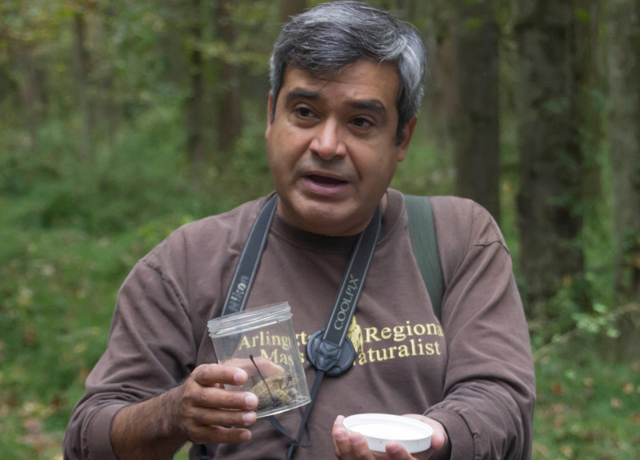 Alonso Abugattas, the Capital Naturalist, is a well-known local naturalist, environmental educator, and storyteller in the Washington, DC area. He is the Natural Resources Manager for Arlington County Parks, VA and the longtime Co-Chair for the Beltway Chapter of Region 2 of the National Association for Interpretation, the professional association for naturalists, historians, and docents. He was awarded their Regional Outstanding Interpretive Manager Award in 2018 and the national Master Interpretive Manager in 2018. He has been trained as a Master Gardener, was made an honorary Virginia Master Naturalist for his role in starting 2 chapters, and serves as an instructor for several chapters in both Virginia and Maryland. He has held several offices (including President) for the Potowmack Chapter of the Virginia Native Plant Society. He was declared a Regional Environmental Champion by the Audubon Naturalist Society in 2020. With numerous mentions and appearances on television, radio, podcasts, and the press, he invites you to check out his NAI Interpretive Section Thomas Say Media Award winning Facebook Group “Capital Naturalist”, his Capital Naturalist Blog, @CapNaturalist on Twitter, and the Capital Naturalist YouTube Channel.

All sessions by Alonso Abugattas

Communicating the Value of Native Plants, In-Person and Online